Missoula’s population growth continues to outstrip the local housing supply, as land and construction costs have increased – a combination that could stress the city’s housing market for the foreseeable future.

Missoula economics experts believe the results could threaten the city’s economic well-being, making it harder for companies to recruit and retain employees who might not be able to find, let alone pay themselves, accommodation in the city.

“This issue of housing affordability in Missoula is something we have paid attention to in recent years,” said Matt Mellott, chief broker and director at Sterling CRA Advisors. “It makes Missoula less competitive in attracting new businesses. From the point of view of economic growth, this can be detrimental.

According to the latest data, the vacancy rate for multi-family dwellings in Missoula fell below 1% at the end of 2020. While it weakened slightly in the first quarter of 2021 to 1.25%, a healthy market has a vacancy rate of 5%.

As supply tightens, the average cost of rent has climbed 5.5% over the past year.

“You see these swings pretty wide,” Mellott said. “What happened in Missoula is the exact opposite of what has happened in most of the major metros, where vacancy rates have gone up and rental rates have gone down. Missoula has been against this for the past year or so. It’s just an imbalance between supply and demand, and it’s that simple.

The last few years provide an overview of the currently tight market. In 2016 and 2017, Missoula developers were briefly overproducing units, which caused the vacancy rate to increase by 2018. In response, the number of newly developed units started to slow around this time, as did the population began to increase each year by about 2%.

Now the city is overwhelmed by another construction boom as the market tries to catch up, but it will take time, Mellott said.

“Obviously you have to create more supply,” he said. “It’s pretty clear that the market has picked up the signal, but due to the planning schedule associated with any type of project, it takes some time for this to happen. “

Housing experts in Missoula said the city needs around 800 new units per year to keep up with population growth. The county added 2,200 new residents last year, but only 175 multi-family units have been delivered to the market.

This year, data suggests that around 230 new units will come online, although that is still not enough. But the years to come could see this change.

But just because a project is planned does not mean that it will be built, he added. If construction costs continue to rise or if another variable comes into play, various projects may not come to fruition.

“Your construction costs are rising faster than rental rates and income is rising,” Mellott said. “The cost of lumber has increased 100% or more since last June. This will have a significant impact on construction costs.

Sterling has surveyed area builders over the past year to get a better idea of ​​the rising costs associated with new construction, including multi-phased projects. The same unit built in 2019 with the same footprint and the same materials jumped 15% the following year.

These costs are starting to add up and land prices are not helping. They, too, climbed an additional 10% or more, Mellott said.

“The cumulative effect is that it will make apartments more difficult to draw, as well as single-family homes,” he said. “With construction costs rising faster than rents and incomes rising, as population increases, at some point something has to give. “ 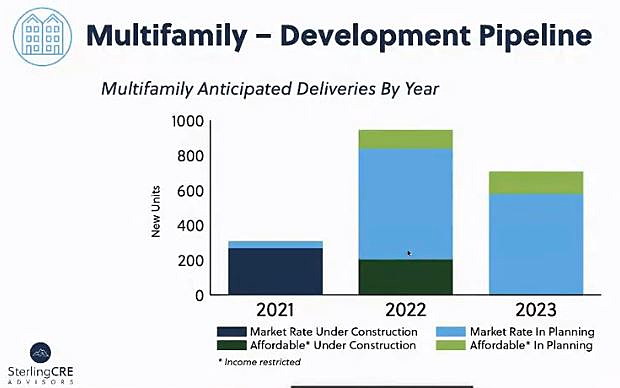 The data suggests that the market will react at some point, and it could do so in a number of ways. This could lead to a rise in local wages as employers struggle to attract and retain employees. But with construction costs rising 15% or more each year, wages are unlikely to increase at the same rate.

Mellott said developers could also accept lower margins, although banks and investors might not find this acceptable and react by refusing to provide construction loans. Labor and construction costs could stabilize as the economy reopens, but this too is uncertain.

Current market conditions could also prompt city and county leaders to resolve regulatory and licensing issues, although this also takes time – sometimes years in recent cases – and is often unpredictable.

The city recently denied efforts by a developer to increase housing density in the high-income neighborhood of Grant Creek before turning around a month later to approve a high-density project in another neighborhood.

“One possibility, which is not always popular, is that the market may respond by increasing density. It’s a matter of regulation, ”Mellott said. “It resets some of the math on what it costs to build a unit. If you manage to spread the cost of the land and infrastructure over more units on the same land, your overall cost decreases.

Sterling and other industry leaders in Missoula plan to tackle the issues over the next few months as they work to find solutions for developers and investors, and help steer the market. of Missoula’s booming housing to a more equitable end.

The city is trying to do the same by subsidizing the market – buying properties with affordable housing in mind. Others want the market to correct itself and believe it is possible with a little guidance.

“We’re trying to understand the needs, wants and wants, and the barriers people face in finding housing or renting,” Mellott said. “We firmly believe that when an economic need is understood, the market will find a way to meet that need. “