Brampton’s $ 6.3 billion municipal infrastructure ages every year and the need to replace some of it becomes more urgent. The cost of the necessary works increases with the increasing price of materials and labor.

This is a problem facing cities in Ontario.

Aging infrastructure is reaching critical points as life cycles have, in some cases, passed their expiration date. Much of the federal, provincial, and developer funds who built much of it have dried up. To preserve their declining assets, local governments have introduced infrastructure taxes: special costs charged to homeowners for a specific need, which are in effect a tax, but separate from the actual property tax line on the bill.

“Although Brampton’s infrastructure charge is among the highest of the municipalities examined, it still does not completely address the cumulative asset management deficit,” explained a long-term financial master plan, prepared for the City of Brampton in 2017.

The document was written to ensure that residents have a well-maintained local government for years to come. “In order [to] fully fund all of the City’s asset replacements, an increase in the infrastructure charge to 4.7% of the tax charge would be required.

Brampton’s current elected and unelected officials have done the opposite.

In his latest annual budget proposal, Barrick, who was handpicked by Brown to run City Hall, cut Brampton’s vital infrastructure tax from 2% to just 0.5%. He took an equally irresponsible bet in 2021.

Brown pushed back three consecutive freezes without a property tax increase during his tenure, with the infrastructure levy being one of many things on the chopping block. This means that Brampton’s plans to keep its buildings, fleets, pipes and roads from collapsing are grossly underfunded.

Downtown Brampton provides a clear example of why rainy day funds for infrastructure should be retained. The area is in an advanced state of disrepair, due to its broken water pipes, crumbling sidewalks and cracked roads, neglected by the City as the area has decayed and attracted extensive property damage and a growing uncompromising population.

A recently approved beautification project, along with infrastructure work by the Region of Peel, will bring investment to the region after years of protracted negotiations. The municipal portion of that plan, which is only a fraction of the downtown renewal strategy approved by the previous council before Brown canceled it, will be debt-financed.

Brampton’s infrastructure ranges from roads to pipes and buildings, the maintenance of which will require significant investments in the years to come.

“By utilizing healthy reserve balances and adjusting the infrastructure charge funding model, the City continues to be well positioned to refurbish buses, trucks and firefighters, roads and fire systems. ‘stormwater,’ Barrick wrote at the start of Brampton’s 2022 budget document.

The claim is patently false.

A 2019 paper, The State of Local Infrastructure Report (SOLI), took an in-depth look at the assets Brampton owns. Using measures that include its age, the report determined that it would cost $ 6.3 billion to replace buildings, roads and other assets, which must be done as they age and become obsolete and dilapidated. He identified a need to spend just over $ 1.8 billion over the next decade to replace parts of his wallet.

The report gave general categories such as fire or transportation high marks, but that does not represent the complete picture. The company’s fleet, for example, received an overall rating of “good”, despite the fact that 52% of its off-road equipment was rated as “very poor”. Even categories with positive average ratings needed attention in some places.

Most of the $ 1.8 billion needed over the decade to repair Brampton’s assets was to come from an infrastructure tax that would add two percent to the city’s total budget each year. The total amount to be collected through the levy was $ 1.1 billion, an average of $ 110 million per year for a decade. Thus, an increasing share of public funds would be devoted to the maintenance of the deteriorated assets of the City.

It was still not enough, but it would have enabled the City to cover the costs of maintaining its infrastructure in decent condition. 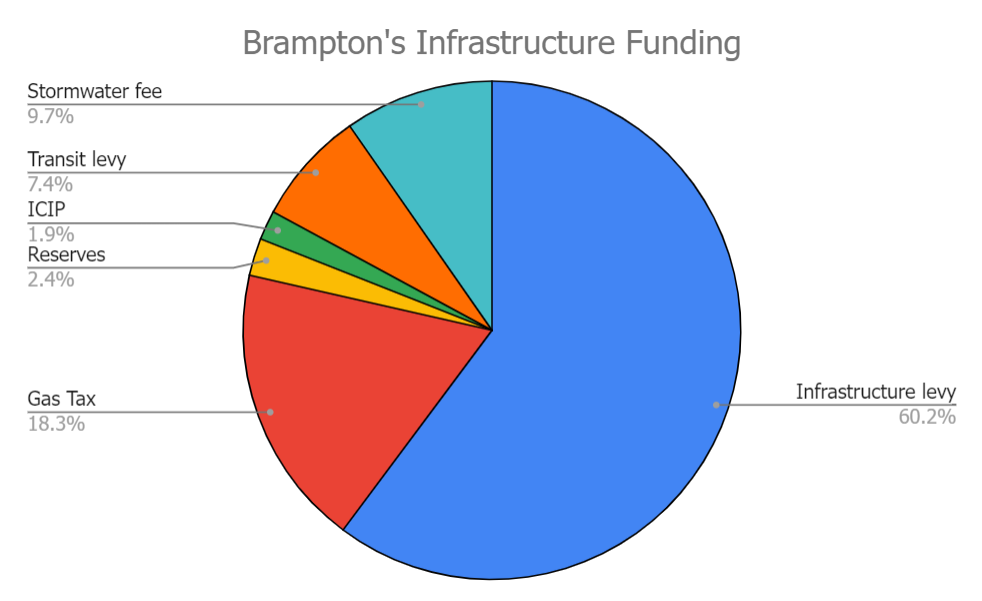 In its 2019 plan, the City suggested that the majority of funding for asset upgrades would come from the infrastructure charge, which will likely be significantly reduced.

(Image by Isaac Callan / The Pointer)

“This level of investment will translate into a cumulative infrastructure deficit of approximately $ 723 million by 2028, compared to $ 337 million currently,” the document said. He identified transportation and parks as the two areas that required the most investment. If the levy was followed, the growing gap would stabilize by the mid to late 2020s. “The concern about an infrastructure gap is not so much that it exists, but how that gap evolves over time. term. “

Under Brown and Barrick, a political hire by the mayor who chose a man with no experience in municipal governance and served as a former Port Colborne city councilor with close ties to Brown’s friends in Conservative politics, Brampton began to stray considerably from its bare minimum plan, towards even less investment in the city.

“In recent years, the City has managed to achieve a 0% change in property taxes, reducing the operating budget while increasing the amount of property taxes allocated to repair and replacement of infrastructure,” says the budget. 2022. “During this term, contributions for infrastructure and public transit increased from $ 54 million in 2018 to $ 87 million in 2021, which equates to a 61% increase over 3 years or more. by 20.3% per year.

Suggesting a 20% increase in the “per year” contribution is misleading, as the base infrastructure tax was already established before this council term to meet minimum needs (the tax increases with the additional 2% tax on infrastructure. infrastructure that has been added above the base since at least 2015). However, that steady growth, the bare minimum for what is needed to pay for aging assets in need of replacement, will now be halted due to Brown’s reluctance to budget responsibly. Reducing the additional infrastructure tax by 2% and the transit tax by 1% to just 0.7 and 0.3% by 2021 means that instead of raising $ 98.2 million this year, only 87 million dollars will actually be collected. And for 2022, the new reduction to 0.5% for the additional infrastructure tax and 0.2% for the transit tax will mean that only $ 90.4 million will be collected, instead of $ 102.1 million. of dollars.

Barrick presented a document last year indicating that the 2022 royalty amounts for infrastructure and transit would be reduced to 2% and 1% respectively, but he reneged on that promise and instead reduced the charges even more than which had been cut off from them last year.

In 2021, CAO David Barrick promised to restore the levies to their previous amounts for 2022 in order to pay for the necessary infrastructure; instead, he proposed to reduce them further.

(Image of the City of Brampton)

The 2022 draft budget will only make matters worse.

Projections from 2019 to 2022 – the four budget documents produced under the current council – show how far behind the City is on its own plan. The 2020 budget suggested that the base infrastructure tax in 2022, with an additional 2% infrastructure tax on top of that (these do not include the transit tax) should collect $ 93.3 million per year. Next year alone, a number reduced to $ 78.2 million in the 2022 budget document, thanks to Brown ignoring the need for an additional levy of at least 2% each year to keep assets safe.

“While this principle is prudent under healthy economic conditions, the current social and financial stress facing the community has warranted serious consideration of affordability versus sustainability when developing the 2022 budget,” explains the budget, explaining the decision to delay responsible investing in the heart of Brampton. assets.

A spokesperson for the City of Brampton referred to the agreement not yet finalized with the Canada Infrastructure Bank as a potential source of relief for the infrastructure tax deficit. 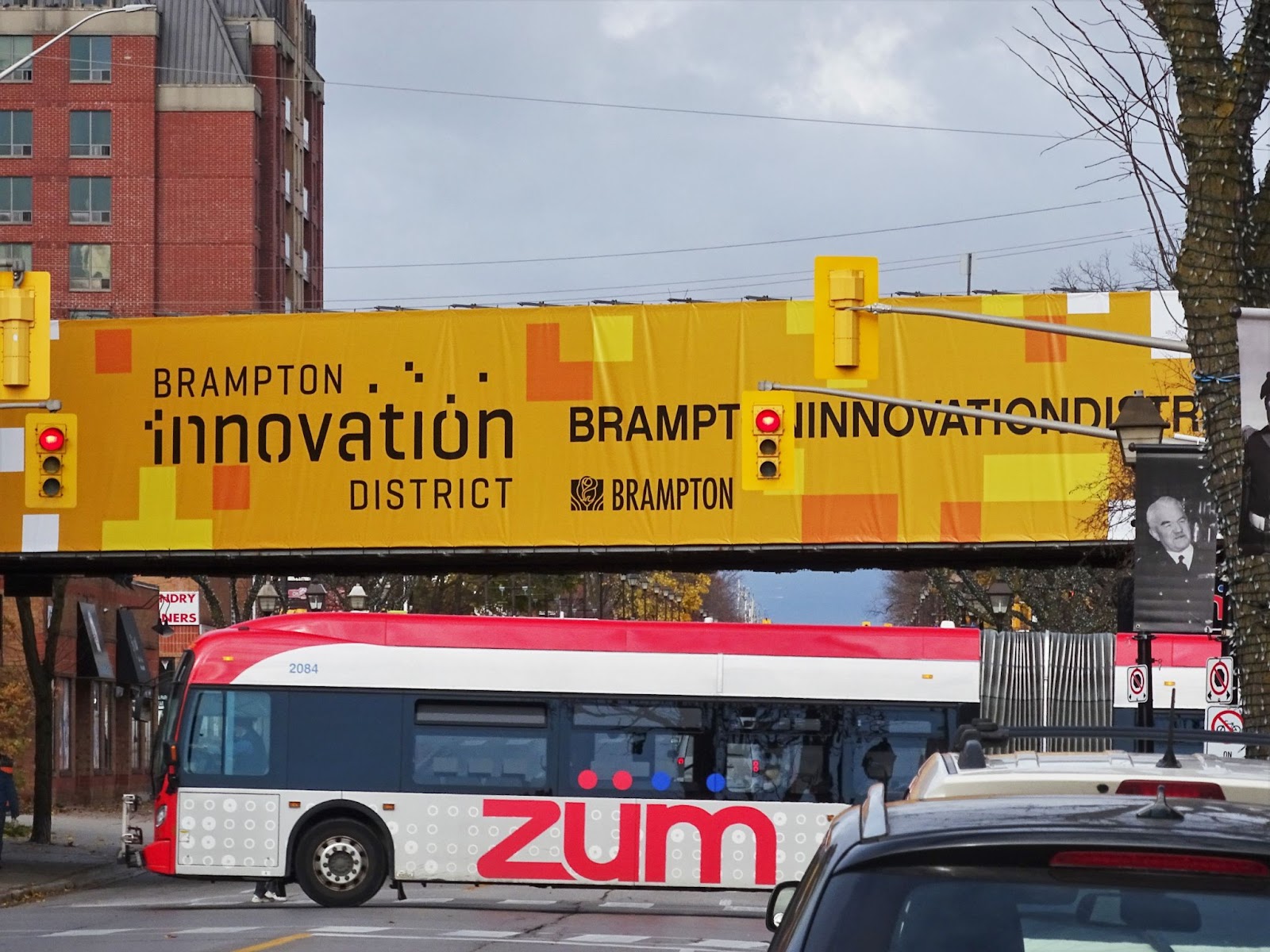 Without proper financial planning, investments in critical infrastructure can be delayed, causing much-needed repairs to be postponed, increasing the risk of failure.

(Image by Natasha O’Neill / The Pointer)

It is not known whether this total amount has been guaranteed, and if it is included in the final 2022 budget but never materializes, it is also not known how the City plans to offset part of the $ 50 million.

Any funding from a federal loan program could have two conditions that Brampton is not well positioned to meet: a repayment requirement; and a matching infrastructure investment requirement, for example, to cover a portion of the City of Brampton to purchase new electric buses.

Brown has developed a habit of claiming funding from higher levels of government, without displaying the ability to obtain those funds.

Councilors will hear an update on the City’s asset management plan and the state of its infrastructure during deliberations on the 2022 budget. Budget committee meetings will begin Monday, November 29, with a separate levy to help. to fund the expansion of phase two of Peel Memorial also potentially on the table.

COVID-19 is impacting all Canadians. At a time when everyone needs vital public information, The Pointer has removed our payment wall on all pandemic and public interest stories to ensure that every resident of Brampton and Mississauga has access to the facts. For those who are able, we encourage you to consider a subscription. This will help us report on important public policy issues that the community needs to know now more than ever. You can sign up for a 30 day free trial HERE. Thereafter, The Pointer will charge $ 10 per month and you can cancel anytime directly on the website. Thank you

Image source: Getty Images The prospect of increasing income appeals to many people. What may …